Led and closed transactions involving stock sales, asset sales, license transfers and other reorganizations contingent on and subject to significant regulatory requirements and conditions of the Missouri Department of Health and Senior Services. These involved both seller and acquisition-side efforts for 10 different medical marijuana licensee clients.

Created and implemented a complex strategy that allowed a municipality to acquire land for a new $1.7 billion headquarters facility for a national intelligence agency. The complex deal for the facility, which will help the municipality keep 3,100 jobs, involved countless negotiations, the use of eminent domain, and landing $131 million in state funding to buy and clear the site.

Served as co-counsel to Peabody Energy, the largest private-sector coal company in the world, in its Chapter 11 bankruptcy proceedings.

Successfully obtained zoning code amendments and land use approvals to construct and operate storage facilities in Missouri.  Prepared multi-faceted applications to amend the zoning codes and to obtain use permits; appeared at several municipal board meetings; and communicated in a timely manner with municipal staff, committees, board members and our client's teams of engineers and architects to meet deadlines embedded in the complex zoning codes.

Special counsel for the City in connection with property acquisitions for a project including flood mitigation and Chapter 353 redevelopment efforts.

Worked with several property management companies to develop and implement the best strategy to meet the landlords’ goals in collecting  all past-due rent, initiating eviction proceedings and/or entering into complex settlement agreements with delinquent tenants to remain in properties, which resulted in collecting over $300,000 in past-due rent and securing punctual performance under the leases.

Obtained dismissal of environmental claims against a client in the energy industry. Because the lawsuit in question was filed after the client filed its Chapter 11 reorganization plan, the U.S. Bankruptcy Court granted the client’s motion to enforce the release and injunction provisions in the confirmed plan. As a result, the court dismissed the causes of action with prejudice.

Represented health care company in a state court receivership action filed in Wisconsin. Prepared all of the necessary pleadings to memorialize our client's claim and advocated on their behalf which ultimately resulted in receiving a significant payout from the receivership estate.

Successfully negotiated the peaceful vacation of  properties and payment of all past-due rent and other fees from delinquent tenants through the initiation of eviction proceedings, and ultimately, the preparation and execution of complex settlement agreements.

Conducted a lease review for a national grocery store chain, consisting of approximately 480 leases across the country with a wide range of landlords and terms. This involved flagging construction and improvement rights, maintenance and repair responsibilities, approaching renewals and incomplete files. 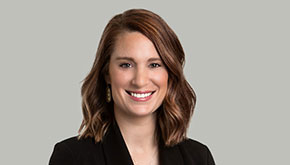