IP Due Diligence and Support

Providing due diligence in IP portfolio acquisitions and disposals (ranging from portfolios in the tens to hundreds of properties), including assisting in documentation and subsequent recordal of changes of ownership. Reviews of IP portfolios for small and large clients to assess fitness to support business aims.

Provided Advice to Legislators Regarding Continuing Effect of EU Trade Marks and Designs in the U.K.

On their request, advised members of the House of Lords on certain defects in the post-Brexit legislation concerning the continuing effect of EU trade marks and designs in the U.K., leading to a government undertaking and insertion of interpretive note in the Parliamentary record.

Provided external IP management for a $1 billion+ multinational company for over 10 years, until they opened an internal IP function.

When a client’s competitor commenced an aggressive patent filing program, assessed possibility of challenge for each patent, and where appropriate, filed third-party observations at the European Patent Office resulting in patents not being granted, so minimizing number and cost of oppositions required.

Visited a client to discuss one patent and was shown two products that were ready to ship that day. Persuaded client to hold shipping for one day, and prepared and filed two patent specifications that resulted in granted patents in multiple jurisdictions.

Resort to the Court of Chivalry

When a client found that their coat of arms was being used as a trademark by a competitor, pointed out to competitor that the Court of Chivalry still existed, resulting in the competitor ceasing use of the coat of arms. 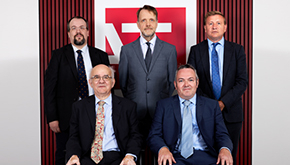