Secured a defense verdict in a trial involving allegations of violations of Section 1983 in U.S. District Court for the Southern District of Illinois. The physician allegedly was deliberately indifferent to plaintiff’s ACL rupture and meniscus injury to knee.

Secured a favorable settlement at trial before jury verdict in St. Clair County, Illinois, in a multimillion-dollar claim involving failure to diagnose an internal hernia.

Secured complete dismissal of a case involving allegations that defendant clients committed intentional, willful and wanton acts resulting in plaintiff’s emotional distress. Plaintiff claimed that the defendants wrongly identified the body of decedent and informed the wrong family that the decedent had been a victim of a homicide.

Secured defense verdict in a jury trial in St. Clair County, Illinois, involving an orthopedic surgeon. Plaintiff claimed the physician failed to diagnose a left ankle infection which resulted in a below the knee amputation. Plaintiff sought approximately $500,000 in damages.

Secured a defense verdict in a jury trial involving a general surgeon in St. Clair County, Illinois. The plaintiff claimed the surgeon violated the standard of care in the performance of an inguinal hernia surgery. The plaintiff claimed he sustained permanent damage as a result of the surgery and sought over $2 million in damages.

Successfully briefed and argued an appellate case before the Fifth District of the Illinois Appellate Court involving questions of subject matter jurisdiction in a dispute that arose under a collective bargaining agreement subject to the Illinois State Labor Relations Board.

Secured a defense verdict in a jury trial in St. Clair County, Illinois. The liability case took place following an automobile accident in which the plaintiff sought more than $100,000 in damages. 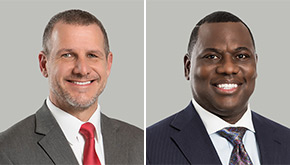