James Thorndyke is a partner at Armstrong Teasdale who focuses his practice in sport, intellectual property and general commercial disputes.

As well as running a busy general commercial litigation practice, which includes advising on contractual claims, shareholder disputes and negligence actions, James has extensive experience in resolving disputes in a variety of sports including motorsport, football, tennis, athletics, cricket and rugby union.

James also has particular experience in advising on regulatory and disciplinary issues. He has acted for clients in proceedings involving the Football Association, the British Horseracing Authority, the Motor Sports Association and the Football League. James also acts for event organisers such as the All England Lawn Tennis Club as well as governing bodies such as UEFA in enforcing ticket terms and conditions to major sporting events.

James’ IP practice concerns the protection, exploitation and enforcement of a range of intellectual property rights, but specifically trade marks and copyright. He advises and acts for companies in a number of different industry sectors including retail, publishing, technology and media and entertainment.

A keen advocate of alternative dispute resolution (ADR), James has settled many cases through a proactive approach to mediation and other ADR processes.

James is a frequent lecturer on topics including reputation management and has written extensively on legal issues in sport, including co-authoring a chapter in Football and the Law on ticketing issues. 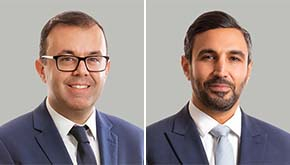