Armstrong Teasdale, a law firm with offices across the United States and in China, proudly announces that Litigation partner Karrie J. Clinkinbeard has been elected to serve as managing attorney of the firm’s Kansas City office, effective September 1, 2016. The firm’s Executive Committee members elected Clinkinbeard as the first woman to the role of office managing attorney in the firm’s 115-year history.

Office managing attorneys are charged with driving growth and success of their given office in coordination with the firm’s overall strategic vision as determined by firmwide leadership and managing partner, John S. Beulick.

“Our Kansas City office attorney base has grown by almost 30 percent in 2016. I can’t think of anyone better suited than Karrie to take the helm and drive the continued success of our practice in the Kansas City region,” said Beulick. “Our people are so important to the success of our firm, and we’re very proud of Karrie’s accomplishments and proven leadership skills in both the legal community and national industry organizations.”

“I’ve been with the firm for more than 20 years and it’s my pleasure to pass the baton on to Karrie,” said Tucker. “I’ve watched her grow in her practice for 17 years and know that her visionary spirit and determination will empower her to lead the Kansas City office and the firm forward.”

Clinkinbeard is an experienced litigator, focusing on fire, explosion and electrocution litigation, product liability, contract disputes, personal injury and life, health and disability matters. Clinkinbeard has substantial trial experience across the Midwest including Oklahoma, Texas and Nebraska. Her numerous successes include her role as co-lead counsel in a $30 million furnace explosion case that generated the largest 2014 defense verdict in Missouri.

She is one of few lawyers in the U.S. to hold the Certified Fire and Explosion credential and she provides pro bono training to fire departments around the country, many of which are volunteer-based and/or lack the funding to train their investigators. Clinkinbeard is a certified instructor for the Department of Homeland Security’s National Fire Academy and is a speaker at national seminars for fire investigators.

Clinkinbeard has been named to Missouri/Kansas Super Lawyers® for the past seven years was recognized as an "Up and Coming Lawyer" by Missouri Lawyers Weekly in 2008. 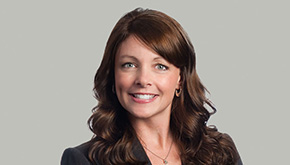