Obtained a dismissal for a communications client in U.S. District Court for the Middle District of Pennsylvania, in which they were involved as a party in a wrongful death, negligence and fraud case brought against one of their own clients. The motion to dismiss was granted based on lack of personal jurisdiction and failure to state a claim.

Tried multimillion-dollar personal injury toxic tort case for Fortune 150 corporation for over 12 weeks in Missouri state court. Represented the client in an appeal to the Missouri Court of Appeals resulting in the reversal of over $200 million in assessed damages.

Selected, in competition with the top 30 mass tort law firms in the country, to represent the City of New York and 150 of its contractors in more than 10,000 lawsuits alleging personal injury and property damage arising from the debris removal and cleanup operations at the World Trade Center site following the 9/11 attacks. Appointed by the Court as Liaison Counsel for more than 500 defendants. Led in oral arguments before the District Court and the Second Circuit.

Obtained summary judgment in an action for wrongful death arising from a catastrophic truck accident.

Dismissal of Claims for Wrongful Death of Professional Hockey Player

Secured a dismissal of claims against a national sports association for lack of personal jurisdiction in an action for the wrongful death of a professional hockey player that was upheld on a writ by the Missouri Court of Appeals.

Served as co-counsel to the driver of tractor-trailer in a seven-day jury trial in the Circuit Court of Madison County, Illinois.

Won an order dismissing a physician for lack of personal jurisdiction in U.S. District Court for the Southern District of Illinois in an action for injuries related to cosmetic laser surgery.

Obtained summary judgment for an auto dealer in multiple actions for wrongful death arising from a catastrophic trucking accident. 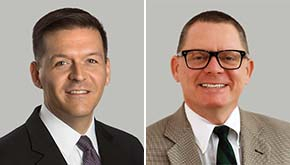