Armstrong Teasdale, a law firm with offices across the United States, proudly announces the addition of Litigation associate Jared Walsh. Walsh is experienced in all aspects of trial preparation, including drafting motions, orders and memoranda; preparing and responding to discovery; conducting depositions; witness preparation; recommending rulings; and case management. He works across practice areas to support clients in various industries on a wide array of challenges.

A former U.S. Marine Corps captain, Walsh is a seasoned military trial lawyer with over a dozen successful jury verdicts. Prior to joining Armstrong Teasdale, Walsh was the mass action law clerk for the Hon. Nancy J. Rosenstengel in the U.S. District Court for the Southern District of Illinois. During his time with the Southern District, Jared was selected to clerk for Chief Judge Michael J. Reagan when the Judge sat by designation on the U.S. Court of Appeals for the Seventh Circuit.

Walsh first joined the federal judiciary in 2015 when he clerked for the Hon. Karen S. Crawford, Magistrate Judge in the U.S. District Court for the Southern District of California.

Prior to clerking, Walsh served on active duty in the Marine Corps as a criminal defense attorney, legal assistance attorney and criminal prosecutor. In his four years with the Marines, he was lead counsel on more than 75 felony cases where he successfully litigated numerous jury trials.

He earned his J.D. and B.A. from Saint Louis University and is admitted to practice law in Missouri. 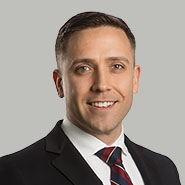