Laurence R. Tucker, senior counsel in Armstrong Teasdale’s Kansas City, Missouri, office, has been recognized by Missouri Lawyers Weekly as one of its 2022 ICON Award recipients. The awards honor attorneys over the age of 60 for their distinguished careers and notable contributions to the Missouri legal community. This year’s list of 31 honorees includes founding partners, firm leaders, current and retired judges, and former public officials.

Tucker serves as lead trial counsel in large, complex business matters. A powerful and experienced advocate, he has tried dozens of jury trials and argued multiple appeals in state and federal courts including the Missouri and Kansas Supreme Courts, and the U.S. Courts of Appeals for the Fifth, Eighth and Tenth Circuits. Tucker also acts as an arbitrator and mediator in commercial and business disputes. In addition, he served as managing attorney of the firm’s Kansas City office for seven years.

Tucker will be honored at an awards luncheon June 29 at the Missouri Athletic Club in St. Louis. Honorees will also be profiled in print and online in a special section of Missouri Lawyers Weekly. 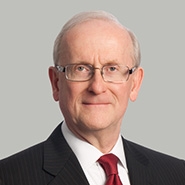