Advised housing management client on the tax implications related to the sale of partnership interests and cancellation of indebtedness income, which included analyzing the tax consequences of transaction structures and financing classifications to avoid negative income tax consequences to the partners.

Served as lender's counsel for a $9.6 million equity bridge loan related to the development of a 236-unit low-income housing tax credit project in Detroit, Michigan.

Served as purchaser's and lender's counsel with respect to a $17.6 million credit facility related to the acquisition and development of a 212-unit low-income housing tax credit project located in North Carolina.

Served as developer's counsel with respect to the development of a 54-unit low-income housing tax credit property located in Oklahoma.

Represented a large independent insurance broker in the sale of assets in exchange for cash and equity consideration valued at up to $137.25 million.

Secured favorable outcome in arbitration for client in a claim by an insurance producer who claimed he owned his book of business and was entitled to more than $2 million following a sale of the company he worked for. Following a two-day arbitration, the arbitrator found for our client and awarded $770,000 in damages, attorney’s fees and $2.2 million in punitive damages after it was proved the claimant lied in his discovery responses and at deposition.

Secured motion to dismiss in St. Louis County Court for a Missouri state-chartered banking client. The plaintiffs claimed several million dollars in damages related to a loan and foreclosure by the client and filed claims alleging breach of contract, breach of implied covenant of good faith and fair dealing, breach of fiduciary duty, wrongful seizure and liquidation in a prior replevin case, and a wrongful foreclosure sale. The plaintiffs voluntarily withdrew their claims and set forth new claims of negligent misrepresentation or concealment, fraudulent misrepresentation or concealment and breach of contract/third-party beneficiary. The Court granted our motion to dismiss based on arguments of res judicata and failure to state a claim, and dismissed the claims with prejudice.

Managed the $825 million acquisition of a manufacturer and retailer of men's and women's active and outdoor outerwear for publicly traded company.

Managed the $1.8 billion sale of publicly traded company specializing in the international manufacturing and sales of men's apparel.

Managed the $35 million sale of a bank holding company and state-chartered subsidiary bank.

Serves as outside counsel for a publicly traded men's apparel company with international operations in manufacturing and retail assisting with national class actions, various corporate issues, and intellectual property matters including those relating to trade marks and patents.

Outside Counsel for Financial Institution

Serves as outside counsel for financial transactions, real estate, acquisitions, employment, and corporate governance matters while working daily with senior management and the board of directors.

Outside Counsel for Affordable Housing Developer

Serves as outside counsel for a closely held national developer and management company of affordable housing projects and related tax credit developments.

Served as outside counsel for a national developer of high-quality multifamily housing and clean energy.

Managed a $40 million financing of a 400-unit apartment community, which includes affordable housing aspects and a Freddie TEL.

Managed multiple consumer class action lawsuits for major men’s retailer. Obtained a dismissal of one lawsuit, and have motions to dismiss pending on two additional lawsuits.

Served as outside counsel for a national real estate development, management and construction company.

Secured the voluntary dismissal of a consumer class action filed against a major clothing retailer in the U.S. District Court for the District of New Jersey. The plaintiff alleged that our client’s sales promotions violated New Jersey consumer regulations governing advertisements, potentially exposing our client to liability for millions of dollars in statutory damages. After an appellate decision in another case confirmed the strength of our motion to dismiss arguments, the plaintiff chose to voluntarily dismiss the lawsuit.

Managed the sale of a closely held international chemical company to a private equity group.

Obtained Dismissal of Consumer Class Action for Retailer in Illinois

Obtained a dismissal of putative consumer class action alleging deceptive advertising in U.S. District Court for the Northern District of Illinois. The Court granted the client’s motion to dismiss, and when the plaintiff sought appellate review, the Seventh Circuit unanimously affirmed.

Obtained a dismissal of putative consumer class action alleging deceptive advertising in U.S. District Court for the District of New Jersey. The plaintiff claimed the retailer's advertisements were misleading because the products were not sold at the advertised regular prices often enough. The Court dismissed the case because the complaint alleged no facts showing that the plaintiff suffered any damages.

Obtained summary judgment for multiple directors of the board of a publicly traded national defense company against former shareholders' putative class action claims, alleging breach of fiduciary duty and seeking millions in damages. The clients successfully moved to dismiss the case, and the Missouri Supreme Court affirmed the judgment.

$1.5 Million Summary Judgment for Bank in ECOA, Regulation B Case

Successfully defeated multiple Equal Credit Opportunity Act (ECOA) and Regulation B claims and obtained summary judgment against multiple developers and guarantors in an amount exceeding $1.5 million and secured an award of an additional $120,000 in attorneys' fees. 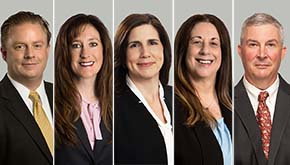