Obtained consent injunction against former executives of a large health care organization and competitor in the U.S. District Court for the Southern District of Ohio, enforcing noncompetition and nonsolicitation provisions and requiring return and destruction of documents.

Obtained a temporary restraining order and preliminary injunction in federal court for a company against several defendants regarding the violation of noncompete and nonsolicitation covenants and the use of trade secrets in violation of the Defend Trade Secrets Act. Resulted in the return of and destruction of confidential information, a complete victory against the defendants, and favorable resolution of the case.

Defeated motion for preliminary injunction in Massachusetts state court seeking to prohibit staffing firm employee from working for a new employer, and vindicated ability of employee and new employer to engage in noncompetitive client service work.

Advised a national corporate in bringing High Court injunction proceedings to prevent an employee from commencing work for a competitor, in breach of restrictive covenants contained in their employment contract. The High Court issued an interim injunction and costs order in our client’s favour, preventing the employee from working for a competitor and recovering a sum towards legal costs. After the interim injunction order, we successfully negotiated a favourable settlement for our client.

Prevailed following an evidentiary hearing on a motion for preliminary injunction brought by a health care technology company seeking to enforce a noncompete covenant against a former company executive.

Served as defense counsel to employee and employee’s company against an action by former joint venture partner to obtain a temporary restraining order and preliminary injunction involving contested nondisclosure and noncompete agreements.

Defense of Client Against TRO

Successfully defended client in a temporary restraining order (TRO) hearing against a former employer who tried to enforce a noncompete agreement.

Prevailed on Motion for TRO

Prevailed following an evidentiary hearing on a motion for temporary restraining order brought by a health care services company seeking to prohibit a former employee from working for his new company based on alleged violations of a noncompete covenant and trade secret misappropriation.

Dismissal of Case in Breach of Loyalty, Trade Secret Case for Reinsurance Executive

Defended an executive of an international reinsurance broker in a breach of loyalty and trade secret theft case brought by the executive’s former employer. The employer sought a multimillion-dollar damages award and after nine months of litigation, the employer was forced to dismiss case on the eve of trial.

Represented staffing company in enforcing a nonsolicitation agreement that prevented former employees, who started a competing business, from diverting multimillion-dollar contract to their new business.

Secured a temporary restraining order for a boiler service company. The defendant, a former employee, left the company without notice and went to work for a competing firm. The employee had signed a noncompete, nondisclosure and noninterference agreement with the client, and the court granted our motion prohibiting the defendant from continuing to work for the competing firm and any other business in the state competing with the client. Following the court’s order, the defendant agreed to a permanent consent injunction.

Obtained a temporary restraining order for a wealth management firm against a former employee regarding the violation of a nonsolicitation agreement. The employee, who had provided services to approximately 300 households representing about $50 million in assets, had signed a confidentiality and nonsolicitation agreement stating he would not directly or indirectly do business with or attempt to take away any of his employer’s clients.

Provided regular national noncompete and trade secret counsel to multiple Fortune 500 corporations across industries. Provide risk assessment in the hiring of employees from competitors, enforcement of restrictions against departing employees, and implementation of policies and procedures related to noncompetes and protection of confidential information.

Successfully enjoined misappropriation of trade secrets in the Circuit Court of Madison County, Illinois, for a major specialty food manufacturer, and obtained a consent judgment prohibiting the solicitation of major customers for a significant period, although the former high-level employees did not have employment agreements.

Obtained temporary restraining order (TRO) and consent permanent injunction against a former employee of a major grocery chain enforcing a noncompete agreement and requiring return and destruction of documents.

Successfully pursued and enforced multiple confidentiality and customer nonsolicitation agreements, along with computer tampering claims in courts in Missouri, Illinois and Iowa, against former employees of national Fortune 500 staffing firm.

Won a preliminary injunction following a three-day federal bench trial for a large supplier of materials used in wine and spirits industry. Protected trade secrets and enforced noncompete, and recovered fees for client.

Defeated manufacturer’s attempt to obtain a temporary restraining order (TRO) in U.S. District Court for the Eastern District of Missouri enforcing a noncompete agreement against a former plant manager. This resulted in a complete victory for the plant manager, allowing him to work for his new employer in the same industry.

Tried a two-week bench trial for a government contractor concerning the company's rights under a defense contract and whether the company misappropriated trade secrets or confidential information. Obtained a defense verdict on these intellectual property claims.

Won a temporary restraining order (TRO) and permanent injunction against the former employee of a publicly traded bank in a trade secret case.

Won a temporary restraining order (TRO) in federal court on behalf of an aviation business in a trade secret case against a former high-level executive.

Won a permanent injunction in a trade secret case against a former executive on behalf of a national franchisor.

Won a noncompete case on behalf of a publicly traded, national staffing company against a former top salesperson, obtaining an injunction and monetary damages. 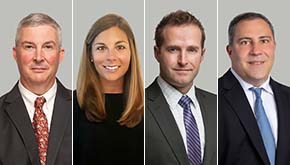